The Celtic Goddess of the Healing Arts and Herbal Lore 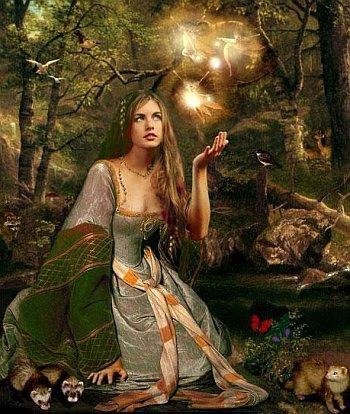 Airmid was one of the members of Tuatha Dé Danann, the most ancient race of deities in Ireland and just as they did, she had great magical powers and was said to be one of the wisest Goddess. She is daughter of Dian Cecht, the God of Medicine, and the Chief Physician and Magician of the Tuatha De Danaan.

She is known in Irish legend as the keeper of the mysteries of herbalism based her magic on the healing of humans and bringing them good health. One myth says that the goddess’ tears watered all the healing herbs of the earth. The goddess decided to gather the herbs and sort them according to their healing properties. Today we have some important knowledge about plants and herbs, which have healing properties

It is believed that Airmid still works as a Physician, high in the mountains of Ireland, spending much of her time healing Faeries, Elves and humans; bringing them all back to good health through her practical knowledge and amazing magical skills.