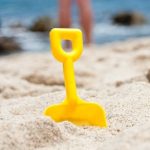 I once heard the phrase “burying the Dutch oven” in a writing group I was a part of years ago. The writer used this metaphor to describe getting rid of something that once represented positive emotions and memories in her life that now only held sadness.

When I was selling my home in Arizona in 2008, the real estate market had taken a nose-dive.  I had a timeline for getting out and moving so I felt desperate.  I read about placing a St Joseph statue upside down in the yard to help sell a house quickly.  Of course, I immediately went to the religious store in Tucson and bought 4 statues.  I buried one statue upside down on all four sides of the house.

In my lifetime I have buried both my parents, my brother who was a Vietnam veteran, aunts, uncles and friends.  While still in Arizona, I buried a hamster named Hammy, two cockatiels, Feather and Valentine and I held a memorial for my son’s turtle, Buddy, who we assumed was “relocated” from our back yard by a hawk and never returned.

Later, after moving to Pennsylvania, I buried another hamster, Chuckie, in my new back yard.  Then my poor old Dusty, the corgi passed leaving our other rescue dog Zoe, mourning for a wee. Zoe would not eat, drink or leave the bed that belonged to Dusty.  Then one morning she came into the kitchen looking for her breakfast.  She was done mourning.  She allowed the release of her friend and companion, then reentered her life with us.

It was several years later that I adopted Pumpkin, a small 10lb Dachshund/Jack Russel -mix who Zoe welcomed with firm loving boundaries. They became friends and Zoe, a whippet mix, would protect Pumpkin from any danger.  When Zoe passed and joined all our previous pets, Pumpkin then mourned her as well.  She refused to sleep in her dog bed but rather insisted on sleeping in Zoe’s bed.  In fact, she destroyed her dog bed – completely tore it up – giving me a very clear message that she was done with the little brown bed and that larger bed, Zoe’s bed, now fit her life.

I have buried, burned, smashed and torn up many items after my divorce, which brought me much pleasure then.  The emotional release of an object and its importance to me felt like it created an openness inside me. I once wrote about burying all the nasty and judgmental statements my ex-mother-in-law would say to me.  In this piece, I wrote a complete eulogy about the toxic nature of each syllable she uttered.  I created a guest list and even the casket that these words would be laid to rest in.

It was a healing – albeit – grim -exercise, but it provided me the opportunity to finally lay those words to rest.  In that same writing, I imagined that beautiful flowers bloomed over the burial ground and that each of them contained a positive affirmation, a kind word and even some beloved poetry.

– First, find an object in your home that may have been given to you by someone you care about or no longer care about.  It can be an item you like or don’t like.  Imagine that you are going to give it away or bury it to symbolically sever the ties it has to your life.

– Write about the object, how you came to have it, where it is in your house.

– Write about the purpose it may have served in your life or the story that accompanies it.

– Write about things people have said to you that were critical and how you will release them.

–  Write about why it may be time for you to get rid of it or bury it.

–  Write about what you once liked about the object.

– Imagine the burial and who you would invite and not invite.  Would it be a cremation or burial?  Where would the ceremony take place?  Would anyone speak at the service?

– Write about how it feels to let go of that object

I encourage all of you to have fun with this and fully indulge your imagination with these prompts presented this week.  As always, feel free to ignore my prompt and write about anything you would like!

You have successfully subscribed!

You may unsubscribe at any time.